Still work-shopping the name, but this is my series where I talk about my journey to Platinum trophies – which I don’t go for very often. You can check out my Sekiro and Persona 5 editions if you missed them!

I have faced the eldritch nightmares and come away victorious – and relatively unscathed. But anyway, my trophy list for Bloodborne has been sitting at 92% for about a year and a half now. I had some time off over Christmas, and I decided it was time to sit down, and unlock the last trophy I needed to get that sweet platinum. The final trophy I needed was for the “Honoring Wishes” ending – you only fight Gehrman, and replace him as host of the Hunter’s Dream – because I had never bothered with that ending before. I started a playthrough a while ago, where I wanted to do a specific “Beast Build” character, which meant I had to do some Chalice Dungeons, and half the DLC (for the Beast Claw weapon, and the ‘Embrace’ Rune from Laurence, specifically) so it was taking quite a while. I stopped playing just after fighting Rom, and that was the save file I picked up again to complete the trophy list. But I’m going to talk about another character here – the one I used to get 90% of the trophies.

Honestly, most of the trophies in Bloodborne are fairly easy to get – most of them you can pick up simply by playing through the game (i.e. the boss trophies and some of the collectible ones). The only one that I can really talk about here is the one that I would assume is a roadblock for most people trying to get the Platinum – the Yharnam, Pthumerian Queen trophy.

The Queen herself is not a difficult boss; it’s the journey to reach her that is the hard part. I think I can genuinely say that the path to getting this trophy was one of the hardest things I’ve ever experienced in a video game – there were several bosses along the way that I died to more times than I can even count. See, Queen Yharnam is the final boss, in the deepest level, of the final Chalice Dungeon. In order to get to her, you need to collect Chalices from other dungeons, which involves clearing these difficult areas. The bosses in the Chalice Dungeons are some of the hardest in the game.

I also made this a lot harder on myself than it needed it be – I tackled this on my regular NG cycle, which I shouldn’t have done. Assuming that the difficulty and health of the enemies/bosses scaled up with NG+ cycles (spoiler: they don’t), I did the Chalice Dungeons between levels 70-80. Before I even did the DLC, actually. This made some bosses, and the Defiled Chalice Dungeon specifically, extremely difficult. But we made it – so here’s the story. Unfortunately, I did most of this years ago, so I don’t really have any screenshots of the Chalice Dungeons… So enjoy random screenshots of other trophies? 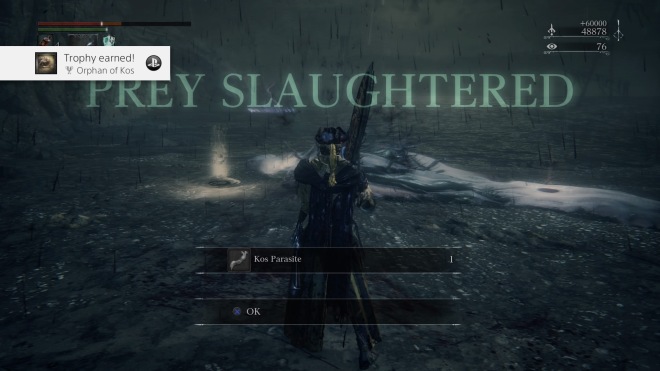 These first three dungeons are pretty easy, as the dungeons themselves are straightforward, the enemies are weaker, and the bosses are manageable. Each dungeon has a “Depth” rating, which is indicative of its challenge – these ones are Depth 1, 2, and 3, making them the easiest to handle. The only bosses that gave me any trouble were the Undead Giant, and the rematch against Rom in the Lower Dungeon. The final boss, the Bloodletting Beast, drops the Defiled Chalice – this is where the real challenge begins.

The issue with this dungeon actually starts before you can even access it – the materials needed to create this dungeon (like 2 “Bastard of Loran” items) can only be collected in other Chalice Dungeons. So I actually had to go through the Ailing Loran Dungeon (which has bosses that are a massive pain) to get these silly items. Though the Abhorrent Beast is probably my favourite boss in the game, so there’s that, I guess?

Once you get to the Defiled Dungeon, you’ll notice that your HP has been cut in half. It will stay this way for the entirety of the dungeon. While physical damage is scaled back (i.e. regular attacks do less damage) elemental damage is not. Any hit of Arcane/Fire/Bolt damage will essentially one-shot you. This is great, because all of the bosses in this dungeon are either Fire (Keeper of the Old Lords, Watchdog of the Old Lords) or Arcane-based (Amygdala). I think you can see where I’m going with this. With my characters HP, I had to do these bosses flawlessly, without getting hit, or I would die instantly. This dungeon was so. Much. Fun. SO MUCH FUN. If my life was Amnesia: The Dark Descent, and I had a sanity meter, it would have been LOW, let me tell you.

Essentially, I had to memorize each bosses patterns, learn how to bait the attacks that I could capitalize on, and avoid all of their attacks to survive. This dungeon took me literal human days to get through. I was stuck on Amygdala the longest, while the Keeper and Watchdog took me an hour or two each. I almost collapsed into a puddle of sludge when I finally beat them all – I was so relieved. Amygdala drops the Great Pthumeru Ihyll Chalice, which unlocks the next, and thankfully final, dungeon.

This dungeon is super difficult, but not nearly as much as the Defiled one. I actually got stuck for quite a while on the Layer 1 boss, the Pthumerian Descendant, because I found his second phase really hard to deal with. I didn’t really have an issue with the Headless Bloodletting Beast, nor the Queen herself. I really enjoyed the Yharnam fight actually – it’s not too hard, and I found it refreshing after the brutality of the other dungeons/bosses. I mean, I had to enjoy it, since it was the one and only time I’d be fighting her (as I’d already resolved to never do this again). The Queen drops the Yharnam Stone, which is completely useless, but is evidence of your accomplishment. Yay? 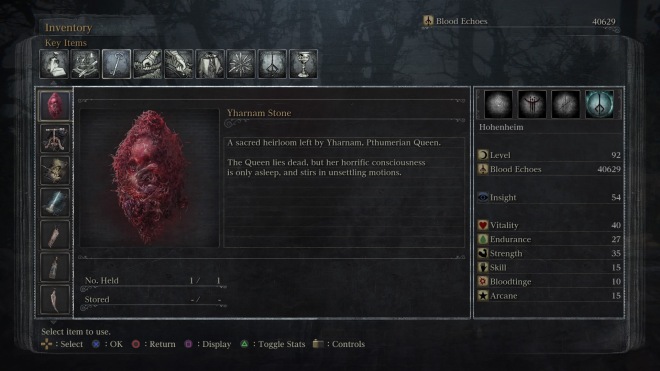 So anyway, that was the most difficult trophy. I finally got the “Honoring Wishes” trophy on my Beast character (see below), after getting my shit together and finishing the build the way I wanted to. So yeah, Platinum Trophy. Finally. Never again with the Chalice Dungeons. Hard pass. 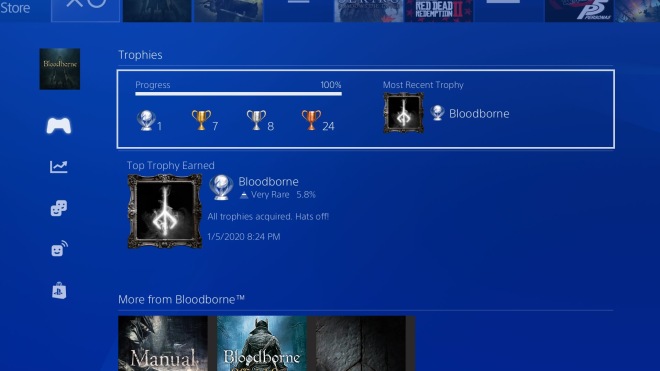