If you’ve somehow managed to remain unaware of the gaming phenomenon that is Among Us, I’m going to assume you’re one of those monks that lives in silent solitude on a mountaintop somewhere. Among Us (from InnerSloth studio) is an online multiplayer game, where a group of crewmates aboard a spaceship attempt to root out the murderous Imposter hiding in their midst. While crewmates have tasks to complete, the Imposter does not – their only job is murdering the crew, sabotaging the ship, and of course, not getting caught. When a body is reported, the crew is pulled into a meeting, and has a set amount of time to discuss who they think the Imposter is, voting them out if they choose (they can choose to skip voting, alternatively). Winning as the Imposter (whether you’re alone, or working with an Imposter partner) takes a surprising amount of cunning and careful deception – you have to know who is around, and when it’s safe to make a kill or call a sabotage. I find being the Imposter extremely stressful, and I’m not particularly good at it, but it’s definitely a rush.

The most ideal version of Among Us is, of course, playing with a group of friends, when you can speak and hear everyone over Discord or some other app during meetings – it’s a lot easier to chat this way, and suss out inconsistencies in stories, than the typing chatrooms of public lobbies. However, if you’re like me and have no friends (kidding – kind of) then you’re stuck soldiering through the swamp of public lobbies, and all the hilarity that comes with them. Public lobbies can vary from being an absolute nightmare, to surprisingly fun, but it’s completely dependent on the other players you wind up with. You’ll get everything from people voting the second someone mentions a colour, even with zero evidence (see: orang strat) to people faking tasks or generally acting like fools and NOT being the Imposter. If you’re preparing to jump into some public lobbies, just do yourself a favour and throw all logic and sensibility out the window beforehand. Server and matchmaking issues aside, I’ve been playing in public lobbies pretty consistently over the last week or so, and it’s been a wild ride, let me tell you.

I ended up in one lobby where (I can’t remember the specific colours, so I’ll make them up) the Red “crewmate” killed in front of Green – accidentally, I assume, but who knows with public lobbies where nothing makes sense. Green immediately reports the body, and types to the crew that Red has killed in front of them. Red responds “No Green.” Everyone votes Green. The fateful message: “Green was not the Imposter” runs across the screen as we all watch their poor jellybean body float off into the soul-sucking, icy darkness of space. To be fair, this was a 50/50 call – either of them could have been lying, but the crew made the wrong call. Fast forward to the next game, where Cyan kills in front of me (Black). I call the body, and report Cyan’s bumble. Cyan says “Nope, it was Black that killed.” The crew agrees it had to be Black, while I sit in absolute stunned amusement. I remind the crew that we were in this EXACT SITUATION the previous round, and they made the wrong call. Despite my arguments, I hear the votes chiming in, so I give up – I say GG to Cyan, and accept my fate. The crew ends up losing the round, after an absolutely masterful showing from the two Imposters. When we return to the pre-starting lobby, everyone starts petitioning the host to kick Cyan. Why? Does that make any sense? I guess they were salty about their own clownery, but the host refused, and we continued to play. Thankfully, everyone was a little less trigger happy from then on.

This is a popular issue in public lobbies – people are all too quick to jump on the lemming train and vote people out on a whim. If I had a dollar for every time someone claimed to have seen “[insert colour here] vent” and then immediately be proven wrong once said colour is ejected, I would have a lot of dollars. For some reason, the meta also favours colours that are not Black, Red or Orange – if you choose any of those colours, you are automatically 13 times more likely to be voted out as the Imposter. Don’t ask me why, because it makes zero sense, but that’s the meta, kids. If you’re lucky, you’ll end up in a lobby where people are happy to have real discussions after a body is found, and refuse to vote without hard proof. These are the good lobbies, where the game feels genuinely fun. Even in bad lobbies, sometimes you’ll make a friend or two – I’ve made a couple pals along the way (shoutout to scientist, and OoP) where we bond over dying first, or the tomfoolery of other players. It’s fun to rage in chat when your friend is killed, and promise to avenge their death. Occasionally we would agree to stick together for a round to keep each other alive, and buddy up to nail the Imposters. This is probably one of the funniest, and most rewarding aspects of suffering through public lobbies – the friends you make along the way. 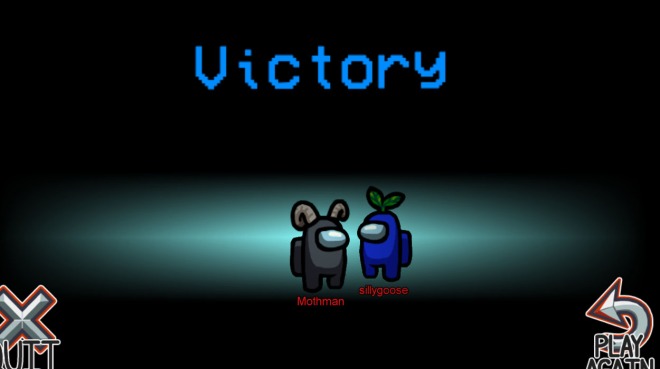 Just a few nights ago (pro tip: play late at night when all the children have logged off) my sister and I joined a random lobby, and it was easily the best one I’ve ever played in – definitely the most fun I’ve had with randoms. It all started with me making a huge blunder as an Imposter – I tried to fake a task with another crewmate for an alibi, and accidentally pressed the kill button. As I panic and move toward the vent, the White crewmate runs up on me. We make a solid 2 – 3 seconds of eye contact before I hop in the vent, and she calls the body. Kaylie, aka the White crewmate, tells the lobby what happened and I explain my mistake – everyone thinks it’s quite funny, and White says that she almost didn’t report because she thought it was hilarious. Over the course of several more rounds, White and I are consistently dying first, and keep each other company in the “dead” chat, while the rest of the crew holds serious discussions to try to find the Imposter. Cyan (Stephy) goes on an absolute spree one round, and kills almost the entire crew singlehandedly.

Then it happens: I get Imposter again, and my partner and I do quite well – but I have to be more careful to a) not screw up again, and b) lie to the people I’ve been playing with for nearly an hour. I can’t remember if we won this specific round, but I somehow manage to be Imposter over the next 5 or 6 rounds in a row. This is exceedingly rare, and let me tell you, I was STRESSED. It became a running joke that everyone would be suspicious of me immediately, and that I (just by chance, I swear) was consistently killing off the same crewmates every round. Everyone was a good sport about it, and I did get Imposter one round where my new best friend, the White crewmate, achieved maximum homie status: I killed another crewmate in front of her, and she didn’t report the body – we continued running around the ship while I murdered and she covered for me. The lobby wasn’t too happy about that one, but I thought it was hilarious (and we promised it wouldn’t happen again).

Another new crewmate joined our merry band (they went by Tsukishima) and became friends with the lobby, especially with my sister, who goes by sillygoose. It was hilarious to see the outrage every time one of us died – we usually earned either a “RIP” or an “Oh no, not [insert colour here]!” It was gratifying to feel like we were both making a serious effort to catch the Imposters, and having a ton of fun joking around with each other. Eventually, after almost 3 hours of play, some of us exchanged Instagram info, and a couple members of our crew began to drop out – Not John, Koko, my homie Kaylie, and sir gawain all disappeared. It was just me, Stephy, sillygoose, and Tsukishima left. We all agreed to play one last round before ending for the night. Shortly after the round starts, we all end up in Navigation together, and we’re dancing around as the lights go off. Tsukishima then hops in and out of a vent several times. We all stand there for a few seconds, then move off as a group, while Tsukishima and their partner slaughter the whole lobby (which were all randoms by this point). The four of us are the last ones standing, and Tsukishima kills me (which I deserved) then calls a sabotage for the win. The rest of the crew probably wasn’t amused, but our little group definitely was. We all said our fond farewells (we earned an “I’m glad you guys have found your soulmates, but can we start the game?” from one of the new players) and signed off. I doubt I’ll ever find another lobby as enjoyable as that one.

This is all to say that, while public lobbies are definitely a hit-or-miss experience, I still think there is a ton of value to be found in the game, even with no IRL friends to link up with. You may have to deal with some trolls, or awful players (PSA: if you ever hit the emergency meeting button to say to the crew “watch me do trash/asteroids/med scan,” you deserve to be yeeted into space) but there are good ones out there as well. Among Us is a fun game, where playing detective as a crewmate can be just as engaging as trying to covertly murder as the Imposter. It’s been an almost nightly staple for me, especially with quarantine limiting any kind of other activities, and now that I’m getting a bit better at playing, it’s becoming more enjoyable. I recently jumped in a game with Frostilyte, Gaming Omnivore, Magi, and DanamesX (along with some others) over Discord, and playing with real people was a whole different ball game – Magi wrote a quick post about it here if you want to check it out! I’m looking forward to playing with them again, but in the meantime, I’m content to keep searching for that diamond-in-the-rough public lobby.

Have you guys tried Among Us? If so, what has your experience been with friends, or public lobbies? Let me know in the comments!

8 thoughts on “Among Us: the Trials and Tribulations of Public Lobbies”