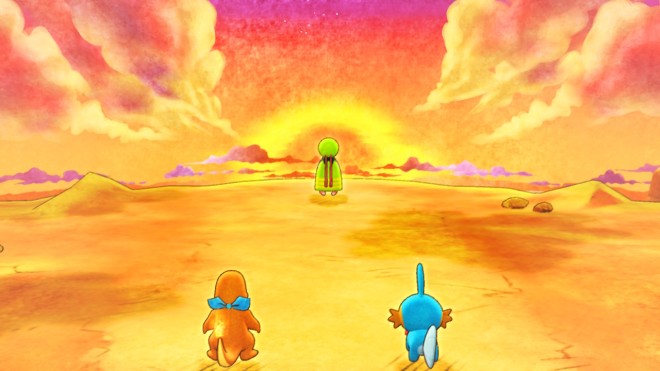 Pokemon Mystery Dungeon: Rescue Team DX (a remake of the orginal Red and Blue Rescue Team from 2005) asks the question: what does a Pokemon world, sans humans, look like? Well, in this title, it looks like squads of Pokemon coming together to form Rescue Teams – to help out Pokemon in need, support their community, and save the day, when the need arises. Which is exactly as wholesome as it sounds. It’s about courage, co-operation, and looking out for your fellow ‘mons – even if they are a Dunsparce. Through a series of randomly generated dungeons, you’ll unravel the mystery behind an ongoing series of natural disasters threatening the balance of the world. With its adorable watercolour graphics, and upbeat tunes, the world of Mystery Dungeon is well worth exploring – despite occasionally dull gameplay.

The core of Pokemon: Mystery Dungeon gameplay takes place in its randomly generated dungeons. You and your Poke partner will traverse each floor, grid-style, defeating enemies in the usual turn-based combat. You can simply tap A to automatically select an attack, or choose from your four options using ZL, and A, B, X, or Y. You can even switch “leaders” to a partner Pokemon, using the + button, to capitalize on type advantages in more difficult dungeons. Whenever I hit a new Forest area, I would switch to my partner Charmander, to help tank the Grass-type moves my Mudkip would be weak to. Another new feature included in this title is the auto-mode, activated by pressing L. Auto-mode allows your Pokemon to explore without any input from the player, only stopping when an enemy is nearby – which I found a bit odd. Gameplay in Mystery Dungeon can, at times, feel fairly mindless, with the press-A-to-win combat, and simple exploration mechanics, so the inclusion of an even less engaging mode was a bit baffling. I rarely used it.

Exploration is made convenient regardless, via a mini map that shows the locations of important items on each floor, whether they’re consumables, or goals related to rescue missions. Scouring each level for items is absolutely critical, as they can be the difference between successfully finishing a rescue job, or meeting an untimely end mid-dungeon. They’re also invaluable for surviving many of the more difficult boss fights you’ll face. The wands especially (Slumber, Confuse, etc.) came in clutch for me, more than a few times. Fainting in a dungeon comes at a high cost – you’ll forfeit all your items, and money. While frustrating, it’s nothing to self-destruct over. Tackling a couple of the easier dungeons to grind up some more Ethers and Apples was easy enough to do, and only slightly grating. It encourages proper planning, and storage management before heading in to a new dungeon. Eventually, I learned to have an Escape Orb handy at all times, should I ever get into a sticky situation. 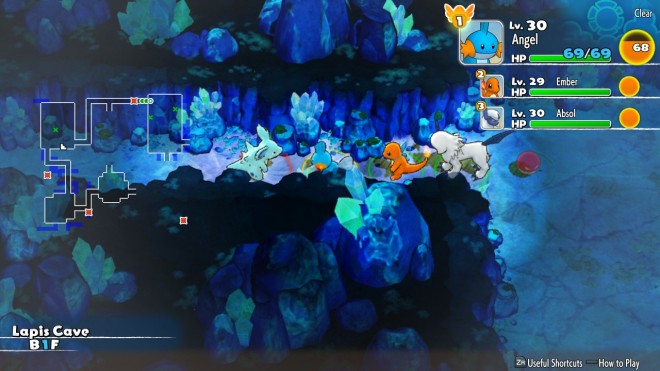 Though the dungeons can become tedious, especially the longer ones, the story is spirited enough to keep the game moving forward. As a human who has been transformed into a Pokemon, its your job to uncover the mystery behind your transformation. After choosing your starter (Rescue Team DX allows you to change Pokemon after its signature personality quiz – I got Bulbasaur, but switched to Mudkip) and your partner, you’ll form your own Rescue Team, and begin scouring the land for answers. But simply being the best (like no one ever was) isn’t the crux of this title – instead, you’ll be helping the Pokemon whose world is increasingly threatened by a rash of natural disasters. These calamities are causing some Pokemon to go rogue, and who better to find the source, and bring back peace than the Rescue Teams? Squad up!

Alongside your partner (aka your best friend throughout this journey) you’ll also be looking to recruit new team members to your cause. Don’t worry – you won’t be knocking on doors, asking “do you have a moment to discuss our Rescue Teams?” Instead, there’s a chance (which you can increase) for defeated Pokemon in dungeons to join you during your mission. Once finished, they can join permanently – if you have the designated camp for them to stay in, that is. This is the new Rescue Camp system – talk to Wigglytuff in Pokemon Square to find the list of camps available to create. Each camp is designed to house a specific group of Pokemon, and there are more than 30 available. For example, if you’ve got your eye on Dragonite, you’ll have to cough up 2,500 Poke coins to build Mystic Lake.

Beyond filling your camps, and delving into dungeons, there’s a few other avenues to explore, like the Fighting Dojo. You’ll be able to strengthen your ‘mons, via a timed run through a single dungeon floor, defeating as many enemies as possible. This is a great way to level up newly recruited members as well, since they tend to be weaker than you and your partner. Feeding your Pokemon gummis is another way to increase their stats, and more importantly, give them a chance at gaining a Rare Quality. Rare Qualities are special abilities that a Pokemon can have, that give them advantages both in, and outside of dungeons; for instance, having a Pokemon with the Tight Formation quality is essential if you plan on using spread moves, like Surf, or Earthquake, to avoid damaging your teammates.

You can see these Rare Qualities, and manage the members of each of your camps, from the Rescue Camp area. You can feed them gummis, check their stats, and change their nicknames as well. This system ensures you have a wide variety of options available to you, but some camps are quite expensive, and until you encounter a Pokemon, it’s impossible to know which one it will need. Trying to predict the best camps to purchase ahead of time is impossible – and you can only create a camp mid-dungeon if you’ve got a Wigglytuff Orb on you. Oh, and that sweet, sweet coin. I generally enjoyed this system – especially later into the game, it felt easier to recruit specific Pokemon than in older titles.

Overall, I definitely enjoyed my time with Rescue Team DX – trying out different teams, defeating bosses, and enjoying the theme of friendship that runs throughout. I think my only problem with this title comes from the lack of excitement. While the story unfolds, the game is fun, and endearing – but when the story stalled, so did my enthusiasm. The drudgery that the gameplay occasionally devolves into, while grinding out samey rescue missions, can suck the enjoyment out of this title. Because the gameplay never truly evolves beyond this foundational structure, the game can become a chore at times. While the polished art style, unique story, and undeniably adorable Pokemon are almost reason enough to pick this up, the whole experience feels just a little lackluster. 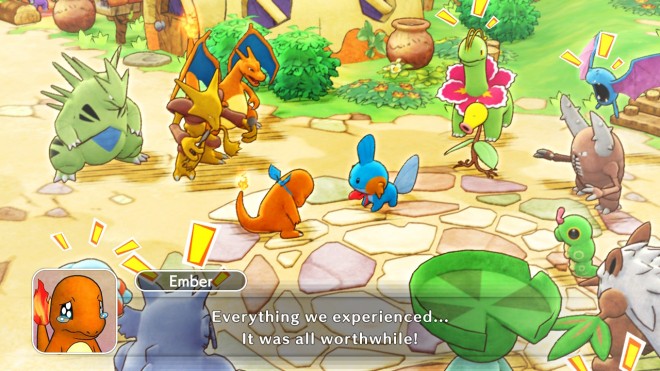 However, Mystery Dungeon is a pleasant, feel-good experience at its heart, with a ton of post-game content beyond the main story arc. With the trash heap that is Humanity™ sidelined, we get to live in the purest version of the world of Pokemon – where a Pidgey rewards me for rescuing its friend with an apple. Where Caterpie idolizes my Mudkip for rescuing it from certain doom. Where Kangaskhan calls me sweetie whenever I take an item out of storage. And of course, where everyone bands together to lend a helping hand, or address a world-ending calamity. Mystery Dungeon’s story is surprisingly heartfelt, buoyed by that signature Pokemon charm – and I am here for it, along with my buddy Charmander, every step of the way.