It’s Valentine’s Day! Hooray! Peace, love, etc. etc. Normally I wouldn’t do a post like this, because Valentine’s Day is a blatant corporate cashgrab, that makes people feel obligated to celebrate connection by, you guessed it, SPENDING MONEY. What was I saying? Oh yeah, but I’m putting aside my anti-corporate attitude this evening in the name of ~love~! Fun fact: back in high school, before I was a jaded, stone-cold crone, I used to photoshop my friends silly little cards to post on their Facebook walls (what a time to be alive). Remember when you were in grade school, and you’d buy those little cards and chocolates for your whole class? Such pure, wholesome times. Still a scam though. 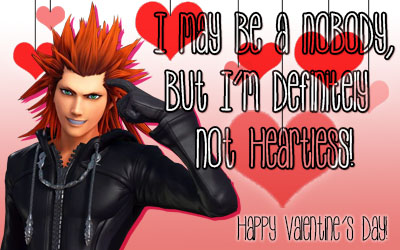 Got it memorized? Toss up with this one between Axel and Roxas, but I decided to go with Axel. I didn’t realize Axel was so popular with the young female demographic (I guess I’m not that special?) but what’s not to love? He’s sarcastic, cool, and aloof, but he’s got a heart of gold. He cares deeply for his friends, even going so far as to betray Organization XIII for Roxas. What more could you ask for? Apparently he wasn’t originally intended to be a recurring character, but due to his immense popularity, became a regular. I think he was criminally underutilized in Kingdom Hearts III, which was disappointing. How could you sideline him like that? Just look at his hair! And his weapons are cool as hell! It quite literally doesn’t get any better.

This is a pretty new one for me – I only picked up the series with Devil May Cry 5 this past month. That probably makes me a fake fangirl (because I’m pretty clueless when it comes to the overarching narrative of the series) but c’est la vie. As my first game in the franchise, I really clicked with Nero. His gameplay/combat is my favourite so far, and I love his design; his English voice actor also does a fantastic job. I for one, appreciate all the swearing he does. The character does a great job of selling all the overwrought, over-the-top ridiculousness that is Devil May Cry. Nero also demonstrates a lot of genuine grit, and determination from what I’ve seen. I mean, that’s pretty much it… he’s’ dramatic, hard-working, and cute as heck. What more do you want?

Ryuji is my boy. He’s absolutely hilarious, the quintessential punk, and a cornerstone of the Phantom Thieves. He is also criminally underappreciated – he bails the group out of many a danger, and all he gets is attitude, and called stupid constantly. I. Am. Having. None. Of. It. He was raised by his single mother (who he is very close to) and, although hot-headed, he does his best to support his friends both in the Metaverse, and outside of it. He calls out injustice when he sees it, and doesn’t take shit from anyone, especially the corrupt adults that compromise Persona 5‘s villains. I adore this character, and he deserves more love. For real!

What about you guys? Who are your video game boyfriends? Let me know in the comments below~! And happy Valentines! Here are a couple of my old cards, as a treat: 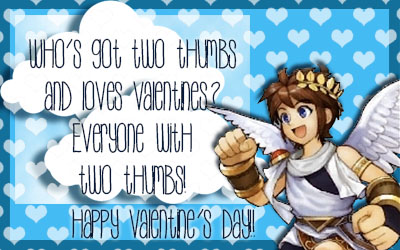