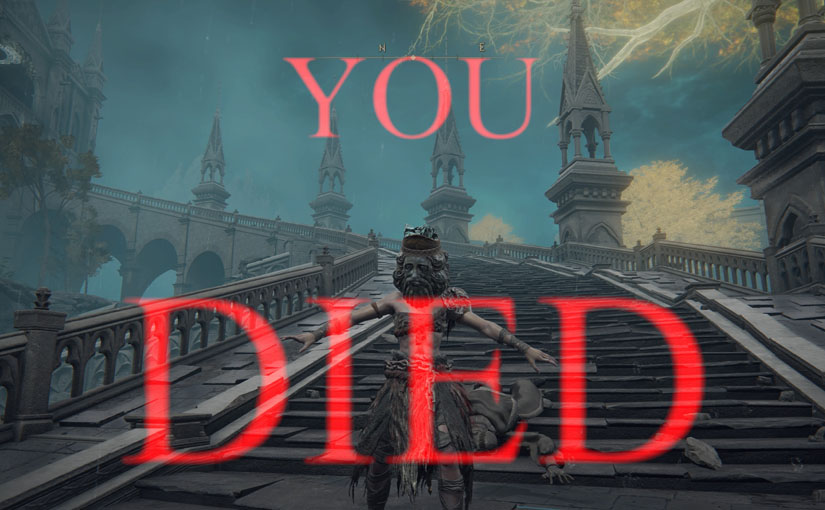 Side note: This is officially my 100th blog post! That’s pretty cool. And good.

To the surprise of absolutely no one, Elden Ring has effectively taken over my gaming life (and many others, if my Twitter feed is anything to go by). There’s a lot to love about this game, but one of my primary interests at launch was how FromSoftware’s incredible level design would evolve – how it would adapt to the new open-world, and how traversal would be affected by your characters new ability to – gasp – jump. Yeah, that’s right – no more is my character, wearing a full set of armor and carrying a 1,000 pound sword, tied to terra firma. We got hops, baby. You may also be pleased to know that some things never change – FromSoft is still FromSoft, and their design choices are still, well, kind of mean. When people talk about FromSoftware, it’s always “difficulty this” and “easy mode” that, but we’re only focusing on the important stuff today – namely, their signature trolling through level design.

FromSoftware’s level design has always been legendary, and for me personally, it’s one of the most compelling elements of their games; this developer’s ability to communicate visually with the player – both in a storytelling, and gameplay capacity – is unmatched. The creative director at FromSoftware, Hidetaka Miyazaki, also happens to be unmatched in terms of trolling, and where better to put that to work than in the craft of worldbuilding? There’s definitely recurring design elements throughout the games (with enemy placement as well) intended to trick the player, and I’ve seen a lot of these patterns in Elden Ring as well. What better time to write an open love letter to FromSoftware’s unique brand of clownery?

It shouldn’t be much of a surprise that a game full of enemies like Bird with Knives for Feet™, Dragon with a Sword™, and Cartwheeling Frog Man™ has a good deal of humor incorporated into it. While this particular brand of humor is usually at the player’s expense, it’s clear that this developer is committed to their style, and I am here for it. Whether its brilliant environmental storytelling, or a surprise enemy ambush, FromSoftware’s care and intention when designing space is unparalleled. So here we go – it’s the triumphant return of what I like to call the FromSoft Classics™, so let’s take a look!

It’s a trap. It’s always a trap. But even when you know it’s a trap, you have to go for it anyway, right? It’s too tempting! There it is, a glowing, tantalizing item, sitting there all alone in the open. This is definitely a certified FromSoftware Classic™, because you know you’re going to get jumped – it’s just not always clear where the attack is going to come from. In Bloodborne, this was a typical scenario: an item is conveniently (not) located on the edge of the rooftop/cliff/elevated walkway you’re currently on. An enemy is definitely hiding around the corner ahead, waiting to push you off (I also vividly remember this happening to me in Irithyll Dungeon in Dark Souls 3) when you go to grab it. Lesson learned. Sort of.

I experienced this recently in Elden Ring while exploring Caria Manor – there are a ton of items scattered around the outer courtyard, and of course, I want all of them. I do my due diligence – check above, any blindspots around corners, to make sure the area is clear. I’m feeling reasonably confident, so I go to grab my treasure. That’s when a weird, severed-hand-spider the size of a small car emerges from the ground and grabs me. Because of course it does. While I’m trying desperately to get away from this hellspawn (and get my heartrate under control) I realize I’ve been caught off guard by this trick for the millionth time. I knew it was coming, and it still scared me. Sigh. Change the “Days Since I’ve Been Trolled by Miyazaki” counter back to zero.

Sometimes, that Lonely Item™ is sitting there, in the open, calling to you, and there aren’t any enemies around. No, really – there’s none. So it’s safe to run over and snatch up that precious prize, right? WRONG, you sweet, naïve fool. Why? Because environmental hazards exist. Take the Academy of Raya Lucaria for instance – just off the courtyard in the center of the Academy is a curved staircase which you can reach with some crafty parkour. The staircase is broken, however – the bottom ends abruptly and drops off into a gaping chasm. But look, there’s an item waiting for you, just at the bottom of the stairs! When you go to pick it up, you may notice a slight rumbling sound, along with a subtle shake of the camera. You’ll probably turn around just in time to get decked by a massive boulder, Indiana Jones-style, rolling down the staircase toward you. Enjoy your one way trip into the Pit of Despair. At least the Site of Grace is close by! I’m proud to report that I wasn’t caught by this particular trap – not because I’m clever, but just because I happened to be standing about a foot to the right of the boulders path. We take those.

Side note: these are examples of the Lonely Item™ being used for evil, but it can be used for good as well – it’s just not nearly as fun. Joking aside, I genuinely love the way that FromSoftware uses certain item placements as a cue to their players – more than once (especially in Elden Ring) I’ve found myself looking at a far off cliff, or distant area, and wondered, “can I actually get over there?” Yes, says the item visible in the aforementioned distant area, you can! It’s like a glowing sign that says “this area is reachable!” It reminds me of the placement of the Rusted Iron Ring in the Northern Undead Asylum from the original Dark Souls (which you can see, but have no way of obtaining at the very start of the game). This served as a hint that you could return to Asylum later on. Using items to entice the player to explore isn’t unique or revolutionary, but the way that FromSoftware utilizes sight lines, and their ability to guide the player visually is just… chef’s kiss.

This is probably my favourite of the FromSoftware trolls, because the conditions have to be just right in order for them to pull this off; it showcases the absolute mastery they have over the environments that they design. Let me explain: this sort of visual trickery is dependent on the position of the camera: by default, it’s centered on the player character, and parallel to the ground. FromSoft takes advantage of this by creating environmental traps using a sort of optical illusion –  an illusion created by abusing this default line of sight into making a pathway appear to continue, when it either a) ends in a drop off (the “pathway” was actually an object further away), or b) has some kind of ‘hidden’ pit because your eyes are up, looking straight ahead. This illusion is also propped up with some good ol’ visual misdirection – lights, torches, and items are used to draw your gaze, and distract you from the fact that you’re about to fall to your death. I LOVE IT.

I remember one instance in Bloodborne – at the beginning of the Forbidden Woods section, there’s a pathway through the forest (which is already full of traps, by the way) that leads to a nasty drop-off – while you won’t die from the fall, it does happen to land you right in the middle of a village full of enemies. It’s hard to see this sudden drop coming, because of the optical illusion created by the area – a trail of lanterns hanging in the trees, and a crowded pathway make it seem as though the trail continues straight ahead.

But back to Elden Ring – I ran into a similar situation in Morne Castle, while exploring behind the main keep. I noticed a long section of roof that I could run across. Except that long section of roof was, in fact, two separate towers with a gap in-between. And wouldn’t you know, falling through that gap lands you right on top of some waiting enemies! I was moving slowly enough that I saved myself from an embarrassing fall, but it made me appreciate how this small section was designed in such a way as to hide this little trap (and reminded me of all the previous Souls games in which I’d fallen for this exact thing). Thanks Miyazaki, I hate it.

Hopefully everyone has seen Jurassic Park, or this reference makes no sense. If you haven’t, you better check out this scene from the movie first. Now that we’re all on the same page, FromSoftware likes to utilize this exact trick entirely too often. You’ll see an enemy, standing on its own, back to you, looking very vulnerable. “It’s free real estate,” you might think to yourself. And as soon as you go for the attack, you get clobbered from the side by some enemies lying in wait that you didn’t see. Clever girl. If you ever see an enemy standing like this, assume it’s a trap. Ask yourself, are these enemies stuck here with me, or am I stuck here with them? Unfortunately, the answer is usually the latter.

I’ve noticed this more than a few times in Elden Ring already, particularly in the recurring Catacomb areas – the little imps that roam these dungeons are kind of a pain in the ass, despite their small size. And even though they only have some piddly little forks to attack with, their raptor-like group attacks can prove to be quite punishing. They seem to be fans of this particular type of ambush, so I’ve made sure to stay alert for this specific tomfoolery.

As it turns out, this is a pretty short list, because I’ve already gone on for too long; this may require a part two, as there’s no end to the groan-inducing ways in which FromSoftware tortures the player with level design and enemy placement. Let me know if you guys have ever fallen for one of these traps, or if you have a favourite element of troll-y level design. You may be entitled to compensation! Alright, I’m out – stay gold y’all!