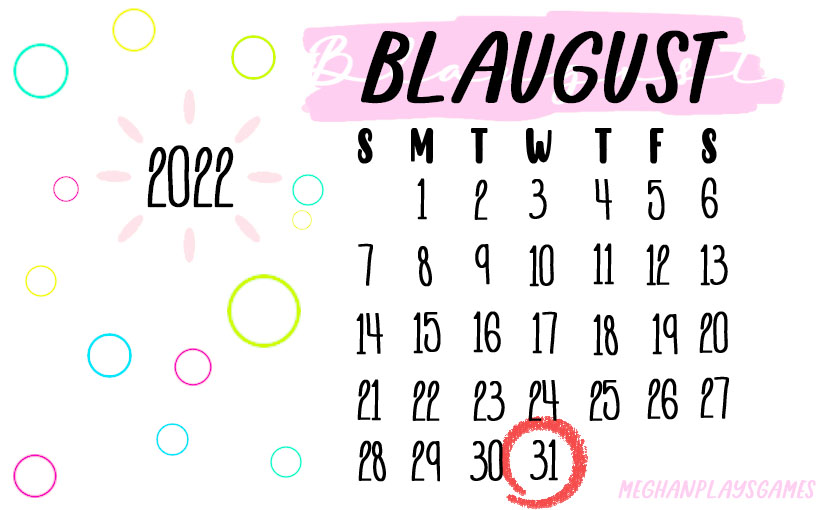 Dawn of the final day

One post remaining! For once, I managed to stick to my commitments, albeit a little behind schedule – but hey, who’s keeping track? I wanted to get 5 posts done for Blaugust, one per week, and I did technically get there. So huzzah, let the bells ring and the banners fly! The idea behind the final week – Lessons Learned – is supposed to be about the Blaugust process, and what wisdom I’ve gained from my writing journey this past month. But truthfully, other than having this event pushing me to put metaphorical pen to paper, I haven’t changed much of my writing habits or how I approach translating my thoughts from Meghan HQ (AKA my brain) into a mostly-coherent post. I still have awful time management skills, rush to finish things in the eleventh hour, and generally seem to be more of an “ideas” person than an execution person. Mistakes were made, and lessons will not be learned. I will continue to be terrible. But this was all to say that I wanted to write a slightly more personal, rambling post about life lessons I’ve learned lately, and how (hopefully) these lessons can help me moving forward.

I had kind of a rough summer, friends-wise. I’ve been having issues with feeling like what I call the “Shelf Friend” – the kind of friend that people contact when they need something, or when they’re bored, only to put back on the shelf to collect dust once they’re finished. I also have an extremely hard time dropping people, even if I feel like I’m being treated poorly; I tend to hang on to friendships even if they aren’t exactly contributing anything of value to my life. And I hate using the word “value” because it almost implies something material, or transactional, when really I just mean someone who contributes something positive to my life, someone who I believe genuinely cares about me in some way, shape, or form (doesn’t even have to be that deep). It’s hard, feeling like you’re more invested in a connection than the other person, and I do find it draining mentally and emotionally.

I’d been feeling quite low for a while, and constantly questioning my worth (in terms of how important I was to other people) certainly wasn’t helping. Seeing constant bad news and all the chaos going on in the world wasn’t great either. I decided to take a break from Twitter, and deactivate for a while (as that was a huge source of my daily news consumption) and it actually did help to improve my mood. Focusing on a routine, and – as silly as it sounds – feeling more grounded in my life rather than thinking about what other people were doing was strangely therapeutic. I finally felt “well” enough to make the hard decision that I’d been avoiding – it was time to cut some people off. Not out of malice, and certainly not without some genuine sadness, but I knew it was the right choice. Knowing when to walk away from a relationship – whether it’s a friend, a romantic partner, or even a family member – is an important life lesson to learn.

So numbers were deleted, people were unfollowed, and sure, it sucked, but I had support along the way, and when all was said and done, I did feel a lot better. And this isn’t to say that walking away from friendships has to be dramatic, or because they’re terrible, awful people. Sometimes they’re just not the right person for you at that time in your life, and that’s okay. It doesn’t mean you hate them, or never want to speak to them again. I think it’s important to focus on positive aspects, good times had, rather than to staying bitter (sometimes easier said than done). Even if that person isn’t a part of your life anymore, they were important to you once, and I like to remember that.

This can also be tricky when it comes to online friendships – I tend to take these types of connections just as seriously as I take my real-life connections, though I know not everyone feels the same. For me, it can be just as hard to lose someone you’ve spent every day messaging for years as a friend you’ve known since middle school. These days, I spend more time chatting with friends online than I do my actual friends (and some literally live in the same neighbourhood). If pandemic life has taught me anything, it’s that fostering these types of online connections can be just as valuable as having a close circle of friends to see on a regular basis. I was talking to Jett about this earlier, and he summed it up in a pretty eloquent way – “If all parties’ hearts are in it, the medium by which your friendship is conducted is beside the point.”

I feel like I’m drifting off from the point a bit, so I’ll wrap it up: I’m trying not to let these experiences jade me, or discourage me from reaching out to people in the future, whether that’s online or in real life. Sure, not every friendship or relationship works out the way you might want it to, but I think continuing to try is the most important take away from these kinds of lessons. You might miss out on connections made otherwise (I know I’ve pursued some friendships recently that have been extremely gratifying) or find yourself disappointed that you’ve held back from certain opportunities. So while I may not have reached Sora levels of understanding the Power of Friendship, I have kept trying, and that’s good enough for now.

This post has been horrendously positive and very off-brand for me (honestly feeling a bit nauseous) so I’ll have to go and do something evil to re-center myself. And by evil, of course I mean something like beating Gulliver with my net in Animal Crossing. And with that, we’re bringing an official end to Blaugust – its been fun, and I really did enjoy it, but thank god it’s over. I want to give one final shoutout to Nathan @ GamingOmnivore for the collaboration post, and Kate @ Blogging with Dragons for all her support, and being my tried and true Blaugust Buddy throughout. I’ll be returning to my regular posting schedule of once-in-a-blue-moon now. See you guys then ❤