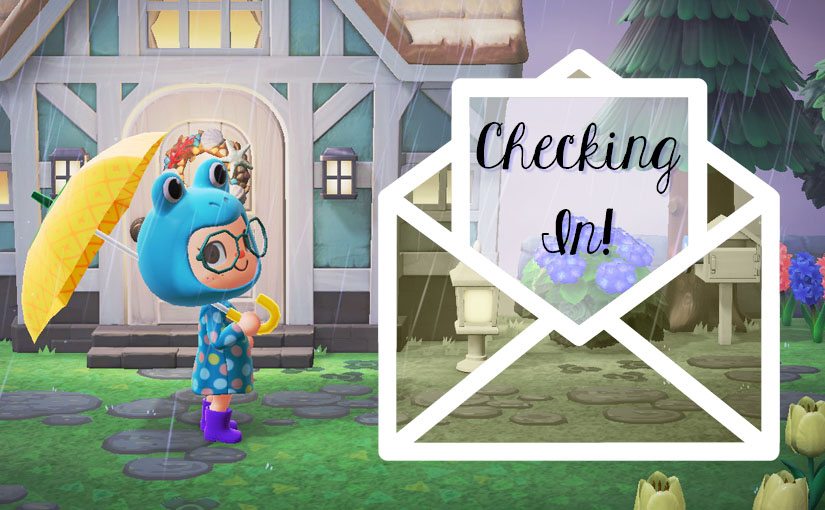 A couple of bloggers I follow have been doing some form of Animal Crossing diaries (most consistently, McKenna Talks About Games, go check out her posts if you haven’t seen them already) so I thought I would (sort of) follow suit, and do a little update on my own island. Mostly to put some of my 9 million screenshots to use. So here’s what’s been going on in Windfall!

Terraforming and decorating my island has been a bit of a struggle for me, mostly due to my lack of attention. I start a project, with some vision I have in mind for a certain section, then realize I don’t have the flowers or items I want, and end up walking away and leaving it half-finished. So it’s looking like Windfall is going to be a “work in progress” for a long time. I’ve settled on a more “natural” look, i.e. dirt paths, lots of trees and flowers, wood accents, because that feels more like the kind of island I would want to live on. I don’t really want it looking like a city or built-up town, because I feel like that’s what my previous Animal Crossing villages have looked like; I wanted to do something different here. I have a couple areas, like a river-side cafe, that are more put together, but otherwise, my island is pretty, um, let’s say rustic.

Windfall has gone through quite a few resident changes in the past weeks – by some miracle, I managed to get my two least favourite villagers, Maelle and Beardo (both of whom moved in without my say-so) to leave on almost the same day. While Maelle’s plot was empty, and I started my Mystery Island tours, I managed to run into one of my new favourites quite quickly: 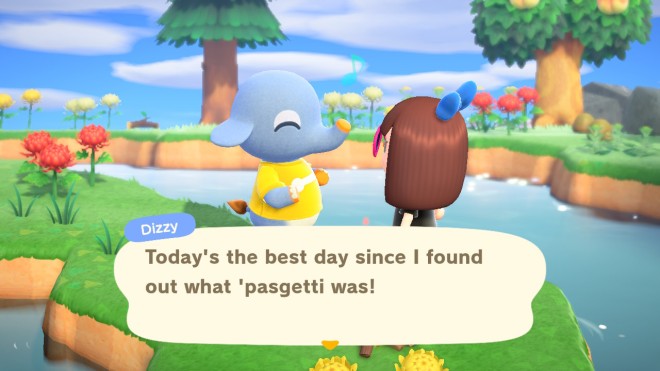 I actually first met Dizzy on my sister’s island. He’s the “Lazy” personality type, and he’s absolutely adorable. He often says hilarious things, and I was more than happy to invite him to Windfall. On the same day I convinced Dizzy to move in, I happened to have a villager staying in my campsite, Kid Cat. When I asked him to move in, he happened to suggest that Beardo wanted to move out to make room for him. I immediately agreed. I still find it sad when villagers leave, even if I don’t really like them – they’re always so nice about it, and will tell you about the positive impact you’ve had on their life. Even if they’re not my favourite, I’m still sad to see them go.

Just this week, I had a relative newcomer, Pierce, ask to move out. I agreed after some deliberation. I actually really liked Pierce, and he and Dom were best buddies (they were constantly talking together – I think Dom liked having another Jock around). He hasn’t been on Windfall for very long. But, with Kid Cat now, that means I have 3 Jocks on my island, which is… entirely too many Jocks. Though I am genuinely depressed that Pierce is leaving. And that means the Mystery Island grind begins again… While I find it fun to try to find new villagers, it’s also a bit of a drag – I still haven’t lost hope in finding Rod and Eunice, my old New Leaf buddies, but as the odds go, it isn’t very likely. When I finally chose Pierce the last time I had an empty plot, I had spent almost 80,000 Nook Miles on tickets, flying to islands all day. It can be a long, disappointing process. I’m hoping my luck in finding Dizzy holds out (I only had to take about 5 trips before he appeared), and I’m able to find someone I like quickly.

Of course, the new swimming/diving update has just been released as well, which is fun so far. Yeeting myself into the ocean and finding new diving creatures to fill the museum is great. I’m actually enjoying the slow release updates they’re doing with Animal Crossing – it gives me something to look forward to, with new events and additions around the corner. If everything had been included upon the games release, I think everyone would still be bored by now, and complaining about things that didn’t make it into New Horizons. I think this boredom/burnout has a bit more to do with COVID, and the fact that we’ve all probably logged hundreds of hours into the game in just a few short months, rather than the specific shortcomings of the game itself. But that’s just my opinion. 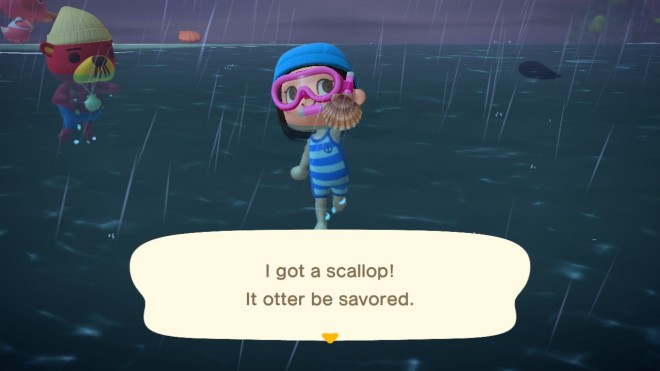 So what’s everyone else up to? We had Marina’s birthday fairly recently (my first villager birthday in New Horizons) and it was cute as all heck. I gave Marina a stack of books for her gift (she’s always talking about reading) and she seemed to be having a great day. Beau’s been pretty funny lately – he was having a great old time at Marina’s party when I went to visit her; but I am concerned about some of his stories… 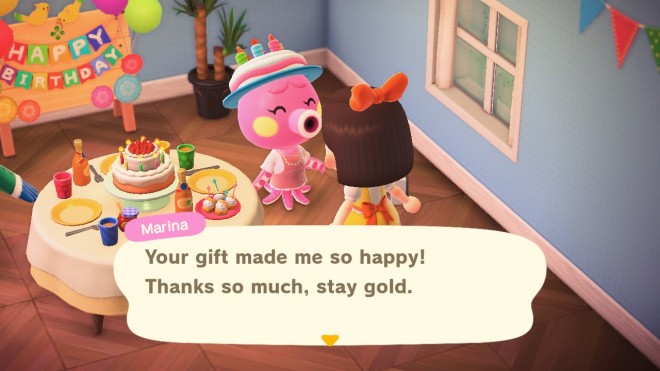 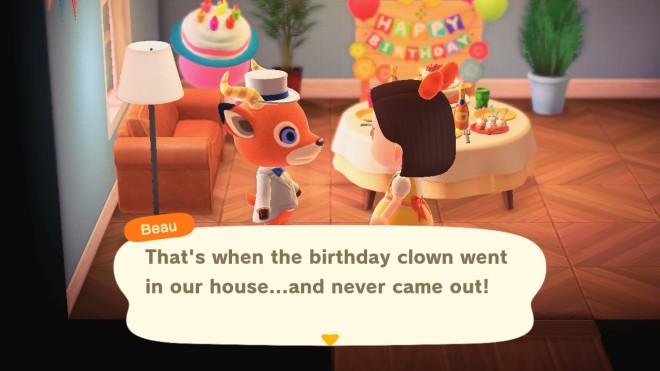 We also just had the first Bug-Off of the summer, and I quite liked it. I think I like the new “timed” format, rather than the size/type specifications for bugs/fish that were present in the New Leaf competitions. All my villagers were out with their nets – I wish they were actually able to catch something! They all try so hard. The prizes for collecting points in the event were pretty garbo honestly (who wants a termite mound??) but I figure I got some nice creepy Halloween decorations, so that’s fine. It was fun just to have an excuse to hang around on Windfall all day. I only got a bronze trophy out of it (for my total of less than 200 points) but I’ll work hard to get the gold one next time.

I’m finally starting to get some of my villager’s photos, starting with Marshal. He’s been super cute, and very nice to me lately, so I think we’re officially best friends. I also got Dom’s photo, which I was thrilled about – he’s my favourite villager (aside from Freckles) and I’m glad to have it displayed in my house now. Marina gifted me her photo just this week as well, so I feel like that’s good progress. Photos (for the uninitiated) are basically the highest symbol of friendship with a villager, and you have a random chance to receive one once you reach a certain level of friendship with them. I’m still working on getting one from Freckles, Sylvana, and Beau. The rest of my villagers are newer, so that will take a bit more time. I don’t think I’ve been talking to Celia enough to be BFF’s with her yet.

Not sure about anyone else in the Northern Hemisphere, but I am just about done with all the rain we’re getting. It’s literally raining every day in my town. My flowers are growing out of control. Please send help. I did, however, finally have my first meteor shower a few weeks ago. My sister came over to Windfall to experience it with me, and we spent almost an hour wishing on all the shooting stars. They’re extremely common during the shower, and I was able to collect a boatload of Star Fragments, a couple Large Fragments, and one Cancer Fragment. Unfortunately, Celeste hasn’t been back since. 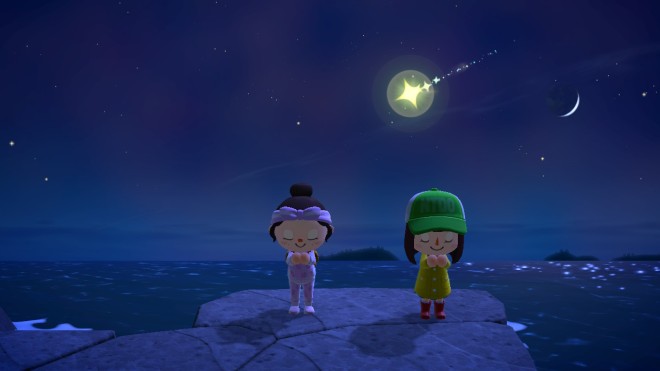 I’m still really enjoying New Horizons, and have been playing consistently every day. Though I might not play for long, I do make an effort to talk to all my villagers, dig up my fossils, and (try) to control my flowers. I finally have some purple roses growing, but no blue ones yet. The process for growing them is a bit ridiculous – I kind of gave up a while ago. But yeah, that’s pretty much it for Windfall updates. The process to shaping my island is an on-going one, but one that I’m still having fun with. Hopefully my next update (if I do one) will include one of my old favourite villagers – and won’t cost me 80,000 Miles to get them here…

Are you guys still enjoying New Horizons? Let me know in the comments! Hope everyone is staying safe and healthy!