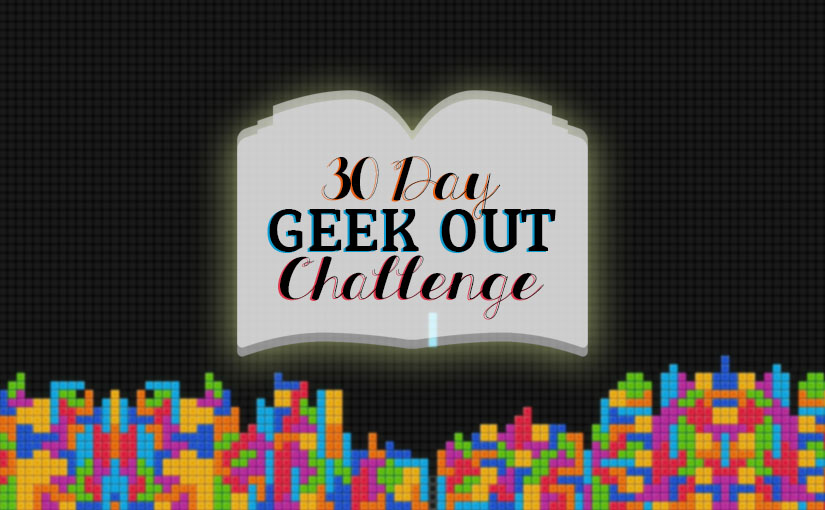 Remember to check out A Geeky Gal’s post for the day, and her 30 day Geek Out Challenge if you want to participate, or read her answers!

I always struggle trying to come up with ‘favourite’ answers because I have so many favourite everythings that I have a really hard time narrowing down my response. So as usual, I’ll be cheating and giving two answers for this question – both in my top ten of all time, and totally different genres – because they’re favourites for different reasons. 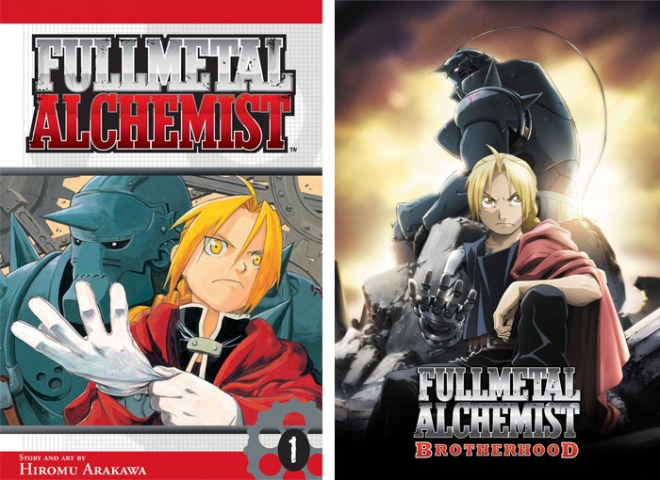 This is easily the show that got me into anime. Growing up, I didn’t really consider stuff like Pokemon, Sailor Moon, or Digimon ‘anime’ – I just saw them as cartoons. This is the first serious anime that I watched all the way through, and quickly got obsessed with. If for some reason you haven’t watched this show yet, a) what are you doing? and b) stop reading this immediately and go watch it. This show actually has two different versions – the original, which was completed before the manga had wrapped up, and so went a different route in the endgame. Fullmetal Alchemist: Brotherhood aired later, which followed the arc of the manga, and ended up a more faithful adaptation. Both are fantastic, though its usually acknowledged that Brotherhood is the stronger. I’ve seen both multiple times through. I’m personally a bit more attached to the original, as it’s the first one I watched. If the ending of Brotherhood could somehow be tacked onto the end of the original, it would be perfect for me. I got so emotionally invested in FMA, it’s not even funny. This show has it all: action, heart, and genuine depth. 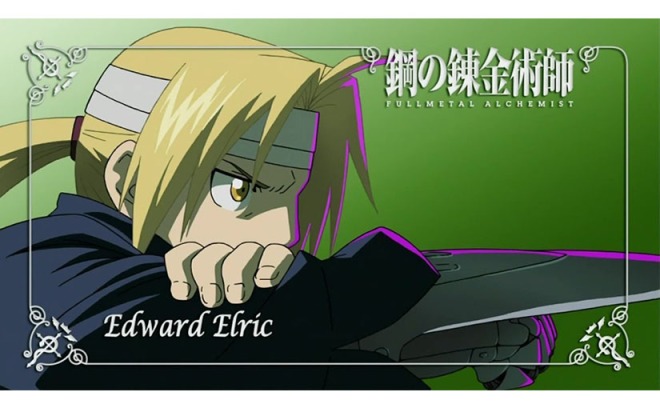 Fullmetal Alchemist centers on a pair of brothers, Edward and Alphonse Elric. As young children, their father abandons them, and their mother dies of illness. In order to try to bring her back, they attempt a forbidden rite of alchemy – resurrecting the dead, or human transmutation – and pay a hefty price when it goes wrong. Edward loses his arm and a leg, while Alphonse loses his entire body. His brother is able to bond his soul to a suit of armor, so he isn’t entirely gone. Edward eventually gets an automail arm and leg as prosthetics (hence, his Fullmetal nickname). The series arc follows the brothers on their quest to improve their alchemy skills, and find a way to restore their bodies. This show is so hard to summarize in such a short space – the depth and scope of it is nothing short of incredible; it hits hard, and keeps swinging. There were countless episodes that literally made my jaw drop, had me tears, or otherwise left me shook. The characters are phenomenal (Ed and Al, Hughes, Mustang, Hawkeye, Armstrong (Louis), Izumi, and Ling being some of my favourites) and the villains are equally so. The Homunculi are terrifying (in both iterations of the series) and are presented as genuinely capable threats. The ‘magic’ (alchemy) system is explained well, grounded, and original. This show is honestly one of the most well-written animes that I have ever watched, and it’s always the first series that I recommend to friends that ask. There is some really interesting symbolism and thematic threads that the series deals with, from religion and science, to hard-hitting questions regarding the nature of humanity – like if it’s okay to sacrifice the few for the many, or what price is too high to pay for progress. I can’t hear or read the phrase “equivalent exchange” without my thoughts immediately drifting to this show. I simply can’t stress enough how incredible this story is and I could probably write a 20,000 word essay on it, so I’m going to stop myself here. 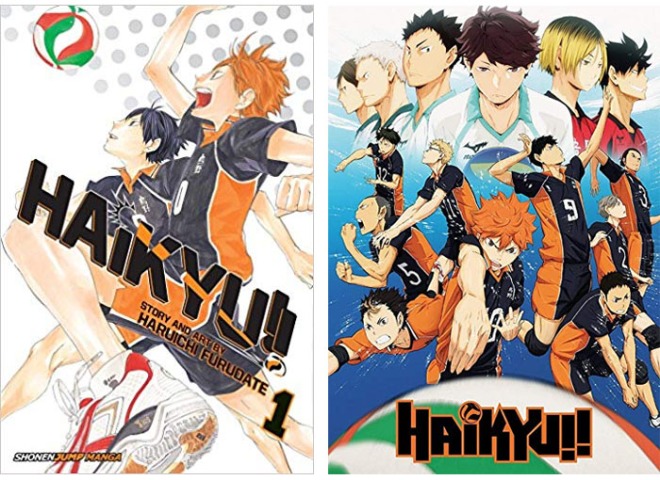 The fact that this show has become one of my favourites of all time is funny to me – I had heard a lot about it, but expected to watch an episode or two and then drop it. I’m not a big sports fan, and therefore have zero interest in watching sports of any kind, but I decided to give the show a shot anyway. Hoo boy, I watched the first season in about three days. I had to make a concerted effort to slow down, or I would have binged the second season in probably the same amount of time. I never expected to get so attached to a highschool volleyball team, but goddamn, this show and its characters are so endearing and well-written that I absolutely fell in love with it. I’ve watched all three seasons of this show more times than I’m publicly willing to admit. I also have to mention that every single intro for this anime is an absolute banger – Spyair and The Burnout Syndromes are so talented, I love their styles. I’m actually planning a post on the writing in Haikyu! (as info on the fourth season has just recently been announced) and I’m so excited, I’m literally gonna die. 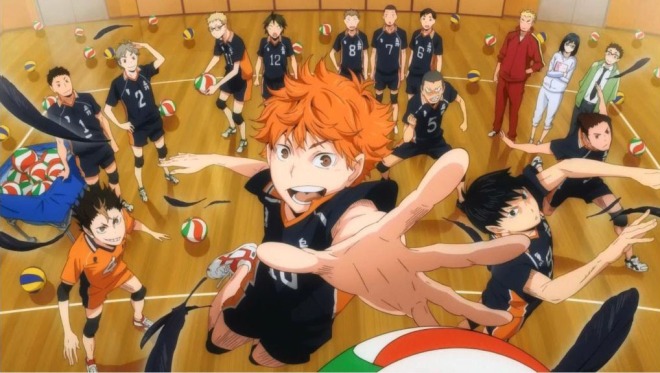 Haikyu! follows its main character, Hinata, on his quest to improve his volleyball skills and play on the same level as his idol, the Little Giant. Because Hinata is so short, he’s at a disadvantage when playing – he makes up for this by using his speed, agility, and natural quick reflexes and athletic ability. Though he lacks some more practical skills, like serving and receiving (as his teammates, particularly Kageyama, are happy to remind him) he becomes an integral part of Karasuno High’s offense. His first year partner and eternal rival is setter, Kageyama, who is a prodigy and extremely skilled. He’s the opposite of Hinata in a lot of ways – he’s calm, analytical, and talented. Their friendship is easily one of the highlights of the show, as they progress from enemies, to rivals, to genuine friends and teammates. Their chemistry is fantastic. Haikyu’s other characters are just as good, with the third years, Daichi, Sugawara, and Asahi, as well as the over-the-top, energetic and extremely likeable second years, Tanaka and Nishinoya (my favourite duo). Tsukishima (one of my new favourites) and Yamaguchi are also solid characters, as are coach Ukai and the team managers, Yachi and Shimizu. 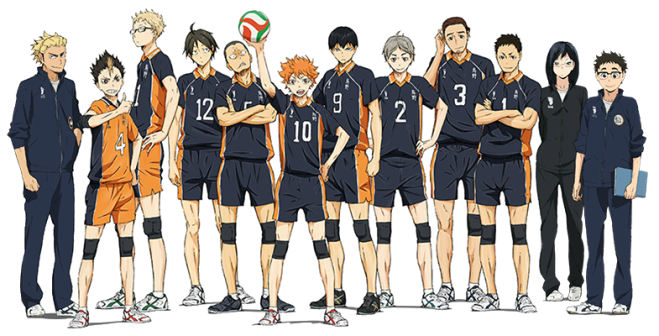 I think one of my favourite aspects of this show is actually its antagonists, and how they’re presented. Every single rival team, and its individual members, are given enough of a backstory to make you feel for them, or maybe even want to root for them a little bit (particularly Aoba Johsai, aka Seijoh). Oikawa, captain and setter of Seijoh, is presented as a huge obstacle for the Karasuno team, and Kageyama in particular, but he is actually an extremely likeable character and easily one of my favourites. The powerhouse rival school, Shiratorizawa, in season three is also developed quite well, which made the season feel all the more epic for their excellent presentation. If you had told me that Tsukishima would have been one of my favourite characters by the end of season three, I would never have believed it – but he went from apathetic bully, to a reliable pillar of the team. His growth was astounding. When he shut out Ushijima’s powerful spike in S3, I think I actually yelled out loud. The fact that Haikyu! can make you like even its ‘unlikeable’ characters is a feat that not many shows can pull off. Other honourable mentions for favourite characters: Kenma (he’s literally me), Bokuto, and (miracle boy) Satori. If you haven’t seen this show yet, you absolutely need to. Season four is on the horizon, and I literally can’t wait!

There were a bunch of different shows I considered writing about for this challenge – let me know what you think of my answers, or tell me about your favourites in the comments!